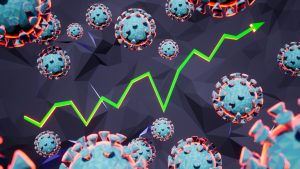 Last week was a surprisingly good week for equity markets. Global equities gained as much as 3.4% in local currency terms and have now recovered the bulk of their losses in the recent correction.

The latest gains at first sight are puzzling given the shenanigans going on in the White House. Of course, it is possible that markets may simply have taken heart from President Trump bouncing back from Covid, larger than life than ever. But they are not known for their sentimentality.

The explanation is more hard-headed. Far from Trump benefiting from a sympathy vote, his antics have increased Biden’s lead in the polls to close to 10%. The betting markets now give a two in three chance of Biden winning the Presidency.

If there is a clear victory for Biden, this reduces the chances of possibly the worst outcome for the markets – a result which would remain in dispute for a number of weeks after the election. A decisive victory, particularly if it includes the Democrats gaining control of the Senate, would also mean it would be easier for Biden to implement his plans for a sizeable fiscal stimulus package early next year.

The concern recently has been that Congress and the President have failed to agree a package to replace the stimulus measures which expired in July. The position here changed almost daily last week but on balance an agreement still looks unlikely this side of the election. If so, the prospect of a new Democratic Government able to enact an increasingly badly needed fiscal stimulus clearly has its attractions.

Still, one should not forget that Biden’s plans for hikes in corporation tax and the minimum wage and increased regulation are distinctly less market friendly. It still looks very likely the lead up to the election will be a period of volatility for markets.

Back here in the UK, the US has been a distraction from the grim news on infections and lockdowns and the latest downbeat GDP numbers. UK GDP posted a sizeable 2.2% m/m gain in August which in normal times would be cause for celebration. However, the increase was half the size expected and significantly smaller than the gains seen in June and July.

The pace of the recovery has slowed significantly even before renewed social distancing restrictions had started to be imposed. Yet the economy still has a long way to recover with GDP remaining down some 9% from its peak. By comparison, GDP fell around 7% in the Global Financial Crisis.

This gloomy outlook may have some bearing on whether or not we end up with a Brexit deal. The last thing the economy, and indeed the Government, needs is the inevitable disruption that would be caused in the New Year by a No-Deal.

This week will be critical with the Prime Minister adamant that the guts of an agreement need to be sorted out by the EU summit on Thursday. On balance, we believe a minimalist deal will eventually be reached, albeit not by Thursday.

While Brexit and the new lockdown measures will be the centre of attention for the UK this coming week, global markets will be more concerned with the start of the US reporting season for the third quarter. Earnings are forecast to fall a substantial 20% compared with a year ago. However, this is a smaller decline than expected a few weeks ago and the 30% drop seen in the second quarter.

Any further gains in equities over the coming year will very likely need to be driven primarily by earnings gains rather than a further re-rating of valuations. Management guidance will therefore be pored over as closely as ever even if the outlook in reality depends heavily both on the election result and forthcoming vaccine developments.