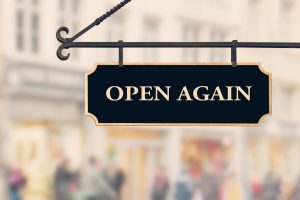 Global equities continued to edge higher last week, rising 1.5% in local currency terms, although a strengthening of the pound cut the gain to 0.2% in sterling terms.

The big focus for the UK was Rishi Sunak’s latest range of measures aimed at promoting the economic recovery and heading off a surge in unemployment. They included a payment to firms of £1000 for each furloughed employee they reemploy, a temporary cut in the VAT rate to 5% for the tourism and hospitality sectors, an increase in the stamp duty threshold to £500k until March, a work creation scheme for young people and – last but not least – the ‘come dine with me’ scheme.

In total, the package may cost up to £30bn and brings the total cost of COVID-related support measures introduced by the Treasury to as much as £190bn. This in turn looks likely to leave the budget deficit this year at around a massive £350bn, or 18% of GDP, almost twice the size at the peak of the global financial crisis.

These initiatives will undoubtedly help although there has been some criticism that the Government is throwing money at the problem ‘willy nilly’ and the measures are not well targeted enough. Only time will tell but certainly Rishi’s efforts did little to cheer up the UK equity market which fell 0.9% last week, continuing the weak performance seen so far this year.

Whereas global equities are now back in positive territory for the year with a return of 1.4%, UK equities have lost 18.2% year-to-date (ytd). The poor performance is down to the UK being one of the economies hit hardest by Covid, lingering worries over Brexit and the relatively large weighting of the energy sector which has suffered from the collapse in the oil price. While the bulk of the underperformance must surely now be behind us, we remain somewhat cautious on UK equities even though they remain cheap.

The big winners this year, by contrast, have been the technology sector and Chinese equities. Both areas saw increases of 4-5% last week and are up as much as 22% and 26% ytd respectively. We have favoured the tech sector for a good while now and believe Covid has only reinforced its strong long term growth story. Valuations have risen significantly but are nowhere near the levels seen in the tech bubble twenty years ago and look justifiable, particularly given the sharp fall in interest rates.

As for China, its stellar performance of late is a result of its economy suffering rather less damage from Covid than elsewhere, recent government attempts to talk Chinese equities up and the importance of the tech sector to that market. We remain positive on China although the ongoing tensions with both the US and Hong Kong are some source of concern.

This week, the US second quarter corporate reporting season kicks off and earnings are expected to be down as much as 45% on a year ago. The risk is that the increased focus on this year’s collapse in earnings calls into question the market’s hitherto optimistic view on the size of the rebound in prospect next year.