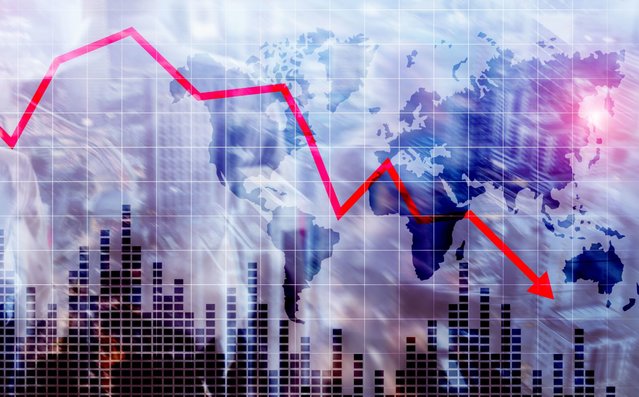 Equity markets are down sharply this morning, following a volatile few days last week. At the time of writing, UK equities are down some 6% from Friday’s close, and are now in official bear market territory, having fallen 20% from their highs earlier in the year.

The sharp rise in coronavirus cases outside China is clearly the main factor behind the wave of panic to hit markets. The worry is that the drastic measures taken over the weekend in Italy are just a precursor to what might follow in other countries in Europe and the US.

It now looks quite possible that the global economy could fall into recession over coming months. Demand will be hit, and company supply chains disrupted, by the containment measures now being put in place.

The good news is that the authorities are now responding. The Federal Reserve cut interest rates in the US by 0.5% last Tuesday and looks likely to lower rates again later this month. The Bank of England should also cut rates in coming weeks.

While these rate cuts may not be that effective in stimulating demand, central banks will probably also encourage banks to treat businesses with temporary cashflow problems leniently. In addition, governments will boost spending although, aside from the odd country such as the UK where a sizeable fiscal boost was already in train, any stimulus should be quite small.

As if there were not enough for markets to try and digest at the moment, a collapse in oil prices over the weekend has added to the turmoil. This follows Russia’s refusal to cut production last week and Saudi Arabia’s apparent intention now to boost output. Oil prices have fallen to $35/pb from $60/pb a few weeks ago.

A lower oil price in the old days used to be good news for the world economy because of the extra spending power it gave to consumers. Nowadays, with the US now a major producer of oil, its impact is much less clear cut.

In the face of all of this uncertainty and the sharp falls in the markets, what should you do? We remain very much of the opinion that unless you have a very short-term horizon or are particularly risk-averse, you should not now sell equities.
While a global recession is now possible, we believe it should be a relatively short-lived affair and that economic activity should recover again in the second half of the year. If so, markets should also recapture much of their recent losses later this year.

Our view is that investors, such as ourselves, with a medium to long term time horizon should stay invested and we have retained our equity positions. There is always the allure of trying to sell out on the way down and buy back in at the bottom.

In practice, the difficulty of pinpointing the bottom and risk of missing out on some of the subsequent recovery makes this strategy very difficult to carry out profitably. Market recoveries are often surprisingly quick, as was the case in the bounce back from the sell-off in late 2018.

In fact, the latest panic makes us more, rather than less, inclined to buy equities. Investor capitulation was one factor we were waiting for before buying and the volatility and declines in markets we are seeing suggest we are closer to seeing this.

We have also been waiting for valuations to become attractive. Valuations have fallen significantly – even if some of this may be an optimal illusion as earnings forecasts will be revised down in due course. Still, global equities now trade on a price-earnings ratio of around 14-14.5x, some 10% below their long-term average.

Finally, we are watching closely for a peak in the growth rate of new coronavirus cases outside China. This unfortunately seems unlikely to be seen for at least a few weeks yet. In China, the news remains good with the number of cases hardly growing now. But there remains a risk that there is a renewed spike in infections now much of the population has returned to work.

We will continue to review these various factors closely in judging whether it is yet right to add to equities and move overweight from neutral. In normal circumstances, this note would be focused on the UK Budget, which is now only two days away, but for the markets at this moment this is very much an after-thought.